The interview reproduces excerpts from a conversation between ter Hell and Detlef Stein recorded in Bremen/Germany on 20 August 2015 and is pretty enlightening for understanding ter Hell's motivation and work.

MY PAINTING IS MENTAL PERFORMANCE AND BODY LANGUAGE

Detlef Stein: You are represented in the Böckmann Collection with works dating from four decades, beginning with the early painting «neo» from 1978. At that time you were a student and then later a member of Fred Thieler’s master class at the Hochschule der Künste [College of Fine Arts] in Berlin. You occupy a singular position in this collection with your non-figurative, gestural-abstract painting and your use of fragments of sentences and writing. In comparison to the figurative painting of the «Junge Wilden» [Young Savages] that was so popular in the early 1980s your works appear like an antipode to that trend…

ter Hell: When I began to paint Modernism was already over, positions such as abstract expressionism, Walter Stöhrer and his «intra-psychic realism», or the «Shaped Canvas» had already been formulated. Performance and video technology contributed new forms of expression. At the beginning of the 1980s a new subjectivism became noticeable in painting, people spoke about the «Junge Wilden», about «Mühlheimer Freiheit» [Mühlheim Freedom] in Cologne, about the Transavantgarde in Italy. I regarded all of this like an alphabet whose letters I could use in my painting. I was not able to get anything out of these possibilities, however, to express the nihilistic worldview I held then. Instead, I asked myself the question: What is a painting? How does writing function in a painting? I therefore treated the canvases and the frames badly, stretched the canvases on the stretchers so that the wood underneath was partially visible. I wanted to destroy the nimbus of the panel painting. This was also done to the accompaniment of punk, since this music and the attitude connected to it played a crucial role for me at that time. Yes, aggression, expressivity played a role, but irony too! I threw paint at canvases, but at the same time I was also searching for structure and order. For my painting Hirn II (Brain II, 1980) I covered the canvas with vertical stripes of colour, but then I also drew contrasting strips across them. I established an order and simultaneously overturned this order, as though I believed in something and yet had to admit that it was undermined from another direction. My relationship to orders, to systems of order in general, played a role here.

In the exhibition «Ich und die Stadt – Mensch und Großstadt in der deutschen Kunst des 20. Jahrhunderts» [I and the City – Human and Metropolis in German Art of the 20th Century], shown at the Martin Gropius Bau in Berlin in 1987, your painting «Ich bin’s» (It’s Me, 1980) was one end of an art historical arc extending from the street scenes of the Brücke painters, to Max Beckmann and George Grosz, and finally to the tendencies then current of young, wild painting. In the catalogue one can read that your picture «Ich bin’s» is «the last consequence of the self-portrait», posing «the question of identity while full of provocative doubts». But the text also proposes graffiti on building walls and public transport vehicles as a «safety-valve for the feelings and fears, denunciations and thoughts of a new generation» and thus as a framework of reference for your painting. Were these contexts important for your work at that time?

Graffiti was indeed regarded as an art form at that time and appeared in galleries; Kenny Scharf was one of these artists. However, I did not integrate writing in my pictures in order to reflect the situation or the atmosphere in a district of Berlin such as Kreuzberg. The painting «Ich bin’s» was also not primarily meant as an object of artistic self-assertion. The stimulus for it was an everyday experience: I was standing in front of a building entrance and was asked through the intercom «Who’s there?». And I automatically answered «It’s me» and thus assumed that the other person knew who was ringing at the door. In connection with its art historical reception, with the new subjectivism in painting, the picture acquired an iconic character, it was understood as the expression of artistic self-reflection. In regards to its compositional means, it was more influenced by Cy Twombly and his scriptorial elements than by graffiti.

In 1983 you redefined a planned solo show at the Neuer Berliner Kunstverein into a joint project that integrated film and music and was documented in the publication «Generics+++». There you write that «(I) see boundaries when I remain in the medium of painting.» Ultimately, though, you have in fact remained in painting…

In 1984 I also organised the Fashion Show in Berlin and the Art Fashion Party MEK at Galerie Löhrl in Mönchengladbach, but the foray into group work was quickly over and I retreated once more to the studio. Up to this point my paintings and themes were strongly shaped by current events, by the politics of the day and contemporary history; I painted what concerned me. Then I embarked on a systematic exploration of the colours black, white, and red, and I worked on my series «Absetzen» [Deposit] with four letter words, which includes the painting «Moni» (1983/84) in the Böckmann Collection.

After 1987 the conditions in which you worked changed, since in subsequent years you were not represented by a gallery. Your work was created apart from the art world. What were the personal consequences for you?

I titled the works of the late 1980s «Jenseits von Begriffen» [Beyond Terms]. They were the transposition of experiences and had the character of a diary. Life galloped forward and from these experiences I made pictures. Wolfgang Siano once wrote that I burrowed into my paintings at that time and then burrowed out once again. Yet, I thought to myself, this cannot be everything. Then the Berlin Wall came down, the art market changed, and I said to myself, I have to do something, the market will not wait for me, I have to put another log on the fire. At the beginning of the 1990s a new work phase started in which I engaged with the changes brought about by new media in habits of seeing and forms of communication.

In your book «Bezüge Bezug» [Relations Relation] from 2015 you have divided your production into such work phases and linked these with contemporary developments – such as the media transformations – but also with contemporary historical events such as the fall of the Berlin Wall or 9/11. On the other hand, your paintings document an on-going investigation of a formal kind, the search for viable compositional schemes and the exploration of painterly possibilities. How would you describe the relationship between your persistently non-figurative painting and the mentioned events and themes?

As a painter I do not illustrate society, I do not paint events. I absorb atmospheres, I am emotionally involved, and I notice how one is running into walls again and again. A painting can be a metaphor, it can be a principle of order and pattern, but can also help to experience exemplary disruptions. My painting «DAS Ordnung» (The Order, 1998) has a variety of elements: blocks arranged at right angles, hard, non-organic forms. But also splatters of colour and a bright background. Order and disorder reign simultaneously. There is a structure and this structure is partially overlapped by the unstructured, red splotches; disparate elements float tautly related to one another.

I asked myself: What possibilities of composition exist for an abstract painting? What possibilities do I have to structure a surface? There is the possibility of a separation, of changing arrangements of pictorial elements on the surface, or of a swarm formation of points, to mention several examples. I also experimented with tensions, polarities, the balance between different components of the painting as compositional possibilities. Jackson Pollock created web-like all-over structures and after him Sam Francis had to find his own way, I too am searching for my niche. This is the formal exploration of visual means, which has the character of an investigation. However, I had – and have had until today – vehicles of content that go beyond an exclusively formal approach.

Can you name an example of this?

An example would be the digital pictures. The simultaneity of the most varied images in Internet, the speed at which these image appear and are replaced by other images. In «Leben im System» (Life in the System, 1995) the compositional element consists of the many overlapping fields, like a multiplicity of monitors.

Photography, X-ray images, later magnetic resonance imaging, these are changing imaging technologies that painting was not able to ignore in the past. I am interested in digital images and the binary structure that is their foundation: Zero or one, yes or no. Today we receive information principally via a digital-electronic infrastructure. This is what my painting refers to, in that it stands apart from it, in a physical, sometimes archaic manner. My painting is a confrontation of the creative «I» with the system of apparatuses.

It is difficult to assert oneself against this system of apparatuses …

Yes, but I am conscious of the technological developments and also of the disruptions that they bring about. The emergence of the personal computer, the pixel as visual element, cyberspace, all of this has interested me from the very beginning. Yet I continue to baulk at this mouse-click culture, it has transformed our structures of thinking and perception. The Böckmann Collection includes «Online Crashing» (1999), a picture from the series «Elektronische Multivision Storyteller FreeMarket» – as though Zeus would hurl lightning bolts and the entire online communication would break down… (laughs).

In addition to your activity as painter you have created a series of texts that have the character of manifests. In 2003 you wrote «From an ‘It’s Me – Understanding’ to a ‘We – Consciousness’», in it you described your work as a reaction against the feeling of powerlessness in the face of existing societal structures. How can you oppose these structures with painting?

I resist as a painter, but not just as a painter! It is resistance in daily work. Joseph Beuys was vital for me in this, because he inspired courage in me; just like Pablo Picasso in his late works. There is a breath in those works. The meaning of my artistic work exists in the attempt to find a place from which I can somehow confront brainwashing, corruption, and capitalism.

Your book «Bezüge Bezug» does not simply document your artistic career and identify the different work phases, but also includes what you call a «Roadbook», a collection of thoughts and reflections on your work. Is the painter ter Hell still travelling, on the road?

More than ever! As a painter I ask myself: Where do I want to go? I compare my work process with continuous research. But the path includes jumps forward, setbacks, and sometimes even loops. My painting is mental exertion and physical language, for me it is fun and is my relationship to the external world. I wear myself out when I paint, I open myself totally, I paint to surprise myself. Either you paint, then it is a form of life, or you don’t paint. 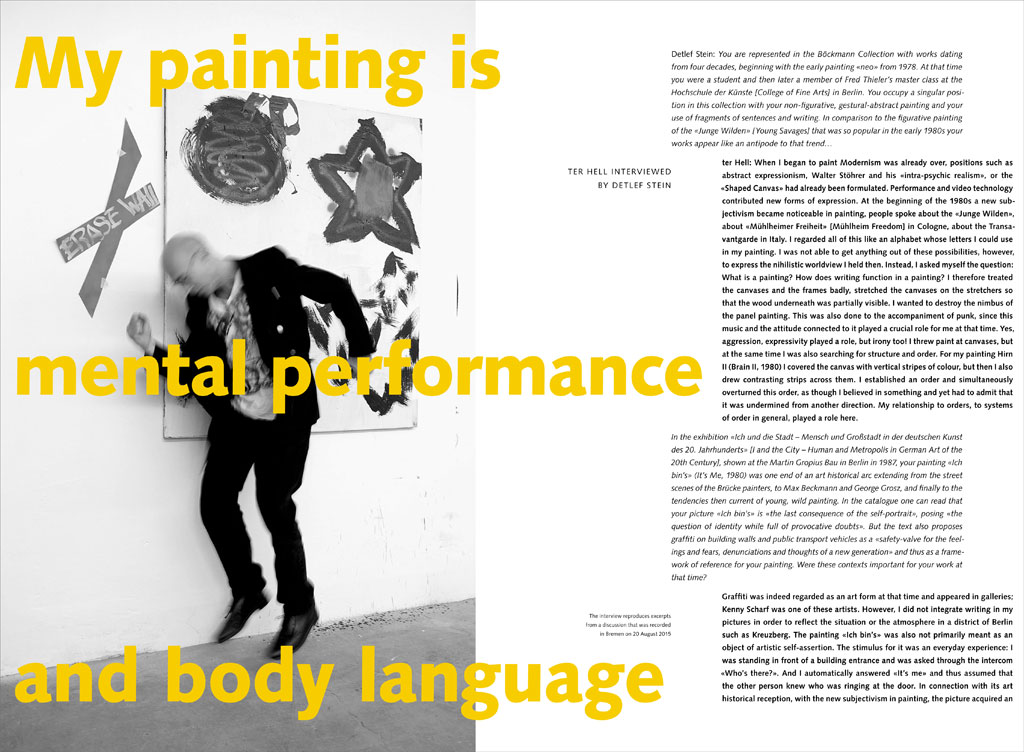